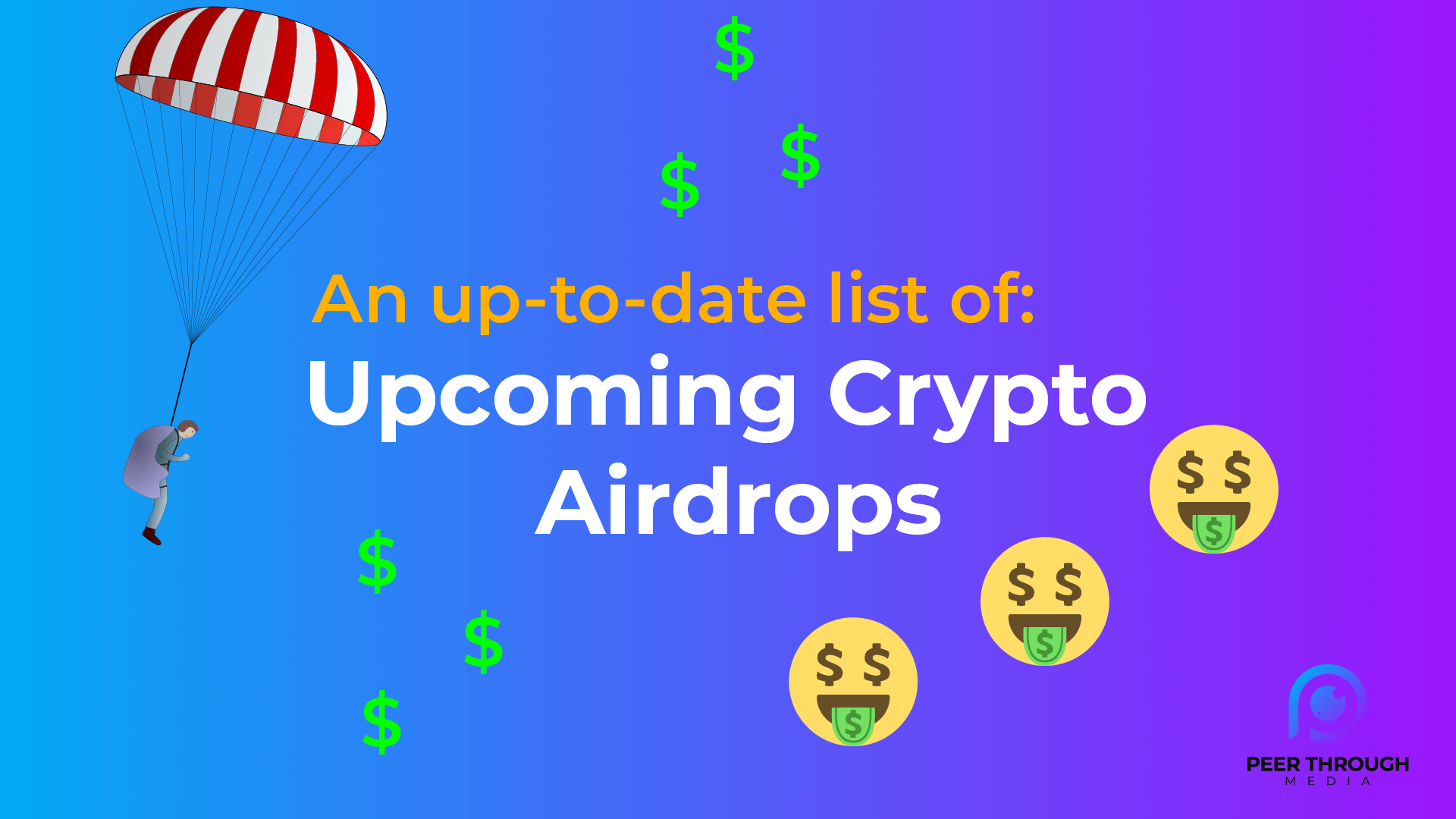 Hey everyone, this is a page where I track and list *possible* upcoming crypto airdrops. What I’m going to do is update this same page weekly with my findings(bookmark it!), putting the most recent/most anticipated finds on top. That way this page will keep all crypto airdrop info in one place, as token airdrops usually don’t have an exact time.

Besides updating this page with new info as I find it, I’ll also do my best to go back and make notes as to what airdrops have already happened so that you don’t spend your time on something that’s already passed.

All that said, none of this is financial, tax, or legal advice. I have no special insider info. Airdrops are pretty speculative, but they usually only cost you a bit of your time. Please be careful of scams, and double-check my info. This listing of upcoming crypto airdrops is a bit more of a quantity/research dump, than a highly curated list. I can be an idiot sometimes and my risk tolerance is pretty high.

I’ve made some good money off Crypto Airdrops, so I’d be collecting this info for my own use anyway. I’m simply making it public to help out the community. Hopefully, we get a lot of free money, but again please be careful and know that I’m not perfect, just a guy who’s airdrop hunting.

Another note, I also don’t plan to list all the stupid little airdrops happening for small dapps on small chains. Of course, that’s subjective, but I’m hoping most of the upcoming crypto airdrops I find are on the larger side, making them worth your while.

Sui is an upcoming layer 1 blockchain that rises from the ashes of the Facebook Diem blockchain project. It is similar to Aptos in that it uses the Move programming language. But in terms of the airdrop, what you need to know at the moment is that the team is pre-token and pre-mainnet. They’ve raised $300 Million from VCs already, so this Layer 1 is highly anticipated.

Currently, they say they have no plans (yet) for an official airdrop. So, maybe it won’t happen, but we’ve heard that before.

You can download the Sui Wallet Chrome Extension (their version of Metamask): https://chrome.google.com/webstore/detail/sui-wallet/opcgpfmipidbgpenhmajoajpbobppdil

Play around on the test net with any dapps you find. Send some tokes. Try to mint a testnet NFT: https://sui.bluemove.net/launchpad

Layer 0 is a cross-blockchain messaging platform. Essentially, it is a different approach to bridging and it has received a lot of funding.

Many feel that there will be a $ZR0 token soon, because it actually shows functionality for a (currently non-existent) ZRO token inside their code.

Use Layer 0’s flagship app – Stargate – to bridge stablecoins across multiple blockchains. (I actually do this regularly because I think it is the best bridge. It’s safer and always seems to be cheaper than hop or across when I check the prices.)

Hold $STG token, stake it, and vote on governance proposals.

Layer 0 had some genesis NFTs – Gh0stly Gh0sts – perhaps holding some of them will qualify you for an airdrop.

Use other Layer 0 based apps like radiant capital, parakeet dao, rage trade and more.

Starknet is a layer 2 scaling solution developed by Starkware. It uses xksync, which a lot of people are quite excited about that. Also, Starkware has a lot of funding and a strong history – as its tech is behind popular perpetual DEX dydx.

Starkware, currently valued at around $8 Billion, confirmed a token airdrop that was supposed to come in Sept. of 2022. However, it hasn’t dropped yet a of late October 2022.

Use Starkware’s official bridge to bridge over some ETH into Starknet and start playing around with dapps. The two main Starknet wallets are Argent for mobile and Braavos as a Chrome Extension. This Eth scaling solution isn’t compatible with metamask, but Argent is pretty cool as a mobile wallet. Argent will also help you with another Airdrop contender on this list ZkSyncs.

Some possible dapps to use:

Similar to most airdrops, the best way to get started is likely to bridge over funds and start using some dapps. There’s also a V.2 zktestnet that you can connect to that many think might be more important than using the V.1 live mainnet for an airdrop.

You can connect your ETH wallet, like Metamask through their main site and then start using zcsync: https://wallet.zksync.io/. Another option is to use Argent to open up a ZK wallet and start trading directly through them.

Some live dapps to use with zksync:

Connect to zk testnet by adding it’s rpc to metamask:

Update… this Airdrop happened. You could have done some more technical testnet tests for more, but for simply minting an NFT on testnet, users were airdropped 150 APT. Which is over $1000, and was even around $3000 – $5000 depending on how fast you claimed and sold.

I claimed and sold, but I bought back in. Aptos is having some PR problems around less-than-transparent tokenomics and VC dumps. These could be true. The tech is pretty slick though and there are a few well-designed apps on the marketplace like Topaz.so, the nft marketplace.

Also, since this is a new ecosystem there are a lot of smaller airdrops you can try to chase because so many things are launching. You could even use the Stargate <> Aptos bridge to get some funds over there and try to get some of that $ZRO token as well.

Arbitrum is a layer 2 scaling solution that uses Optimistic roll-ups. The network has been live for quite some time, and (as of late October 2022) is the 6th largest chain in terms of TVL. There’s just under a billion on Arbitrum.

The main way to get an Arbitrum Airdrop is bridging to Arbitrum and using some dapps. That said, Arbitrum also held the Arbitrum Odyssey that specified specific tasks for users. It was supposed to be a 6-week process but was paused after week one. You can still join though, and look for it to resume when the market returns.

There is also an Arbitrum Guild that gives users specific tasks. They claim that the Guild will only grant you special discord roles, but it couldn’t hurt to try and will have you using Arbitrum none-the-less.

Thanks for reading. Bookmark this page, as I will be updating it regularly. Also, any links to the page or tweets for exposure would be much appreciated.