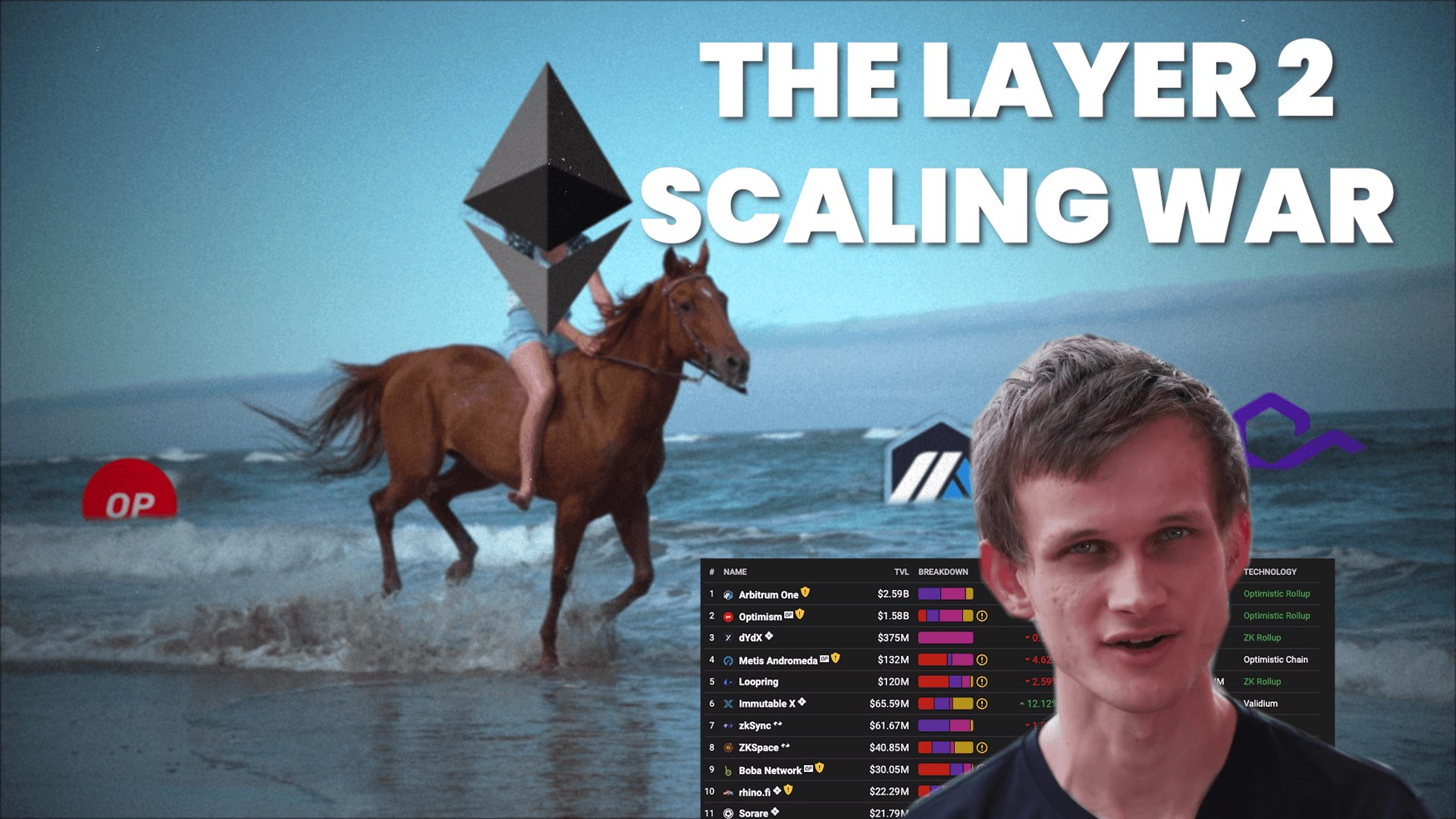 If Ethereum is going to power our economy, it has to scale – and there’s a battle taking place between alternative layer 1 blockchains and Layer 2 scaling systems.

Whichever projects come out on top, are likely to win big, and take their early adopters to the promised land along with them.

In this article, we’ll cover the scaling issue at hand, the basics of layer 2 scaling solutions, and different types of roll-ups so that you can make an educated bet on the future of our economy.

We’ll also clue you into some early actions to possibly earn free crypto airdrops as this Layer 2 scaling space unfolds.

Ethereum as a Layer 1

Ok, so here’s the general idea. Ethereum is on track to become the world computer, giving anyone the ability to build a decentralized record of transactions, histories, social media posts, or really whatever on top of the blockchain.

Ethereum has proven itself to be secure. The problem is it’s slow and expensive. This means other teams and projects are doing two things to help and/or compete:

There’s a wave of other layer 1 blockchains trying to catch up to and compete with Ethereum. Examples: Solana, Sui, Aptos.

Some of these chains may be technically superior, BUT they usually lack in almost all other areas in terms of decentralization of validators, developer community, liquidity, tooling, support, and most importantly – battle testing.

Ethereum has been up and running for years with billions of dollars of value at stake. While there are often hacks of dapps built on top of Ethereum, the Ethereum chain itself has been pretty bulletproof.

Related Reading: MakerDAO CDP Tutorial – How To Take Out a Loan on the Blockchain

Another approach to scaling Ethereum is to build a layer 2 off of Ethereum. A true layer 2 leverages Ethereum’s Layer 1 Blockchain as security. They do this by processing a lot of transactions, rolling them up, and then committing that roll-up of transactions on to the main chain of Ethereum. A good analogy for this would be a bar tab.

What are Layer 2s? The Blockchain Bartab Analogy

Ethereum is the trustworthy and secure bartender. The last line of defense that, ultimately, swipes the credit card on the machine. A layer 2 is the bar tab that keeps track of transactions, rolls them up and then commits them to ETH as one transaction instead of 1000s.

A layer 2 keeps the tab, and then Ethereum only has to swipe the card once for all the drinks rather than after each individual drink.

What’s primarily still being figured out is: what is the best way for Ethereum to be sure that the tab is correct before running the card?

The first two major layer 2s to hit the scene were Arbitrum and Optimism. Combined these two layer 2s have over $4 Billion in Total Locked Value.

Both these layer 2 projects use Optimistic roll-ups to “settle up their tab” with Ethereum. To go back to our analogy, that means that the layer 2 validators submit their tab, and then there is a holding period.

During this holding period, others come in and check to make sure the tab is correct. If it’s wrong, that validator’s stake gets heavily penalized, and those who check get the rewards. If it’s right, the card is eventually run.

This incentive system works relatively well, but it does not make for quick finality of layer 2s on layer 1, and Optimistic roll-ups rely on the “optimism” that everyone is acting in good faith and economically logical game theory.

ZK Rollups rely on math proofs, rather than game theory.

Essentially, the transactions are organized into batches, a proof is generated for those transactions, and then the proof is verified and submitted to a smart contract that is deployed on Ethereum’s mainnet.

Smart folks, Like Vitalik Buterin the founder of Ethereum, think that ZK Roll-ups are the future for layer 2 scaling. However, a ZK roll-up that is EVM compatible and can run smart contracts has yet to be entirely launched into the wild.

Some teams working on a smart contract compatible ZK layer 2 are:

At the time of making this video, ZKsync, Scroll, Arbitrum and Starkware have yet to release a token, but they have plans to. Optimism also still has further rounds of airdrops scheduled.

If you want to increase your chances of receiving a crypto airdrop from one of these up-and-coming layer 2 scaling solutions, play around on their testnets and alpha mainnets. Bridge over some funds and use some layer 2 dapps.

As airdrops are speculative and requirements ever-changing you can find an up-to-date link to more info on possible actions to improve your chances of airdrop success in the description.

Thanks for reading we hope that this helps keep you ahead of the curve.

Ethereum has been plagued by slow transactions, network congestion, and high gas fees. The solution? Layer 2 solutions like Arbitrum. In this article, we’re going to review the Arbitrum ecosystem. Rollups vs Sidechains To fully understand Arbitrum, we need to understand the problem it is trying to solve. Along with other Layer 2 solutions in… 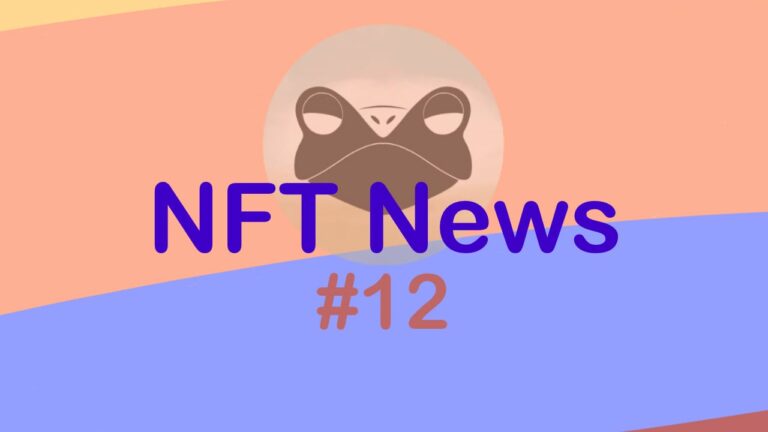 No Fun Toads NFT Collection: Discord: http://discord.gg/UTRm2xxYFg Twitter: https://twitter.com/NoFunToads website: https://www.nofuntoads.com This is the No Fun NFT news round up brought to you by the no fun toads. Check out our project. #NFT #AI #Botto Transcript: Move over Alexa, there’s a new robot on the block (chain).  I’m Caster The Toad and on this No… 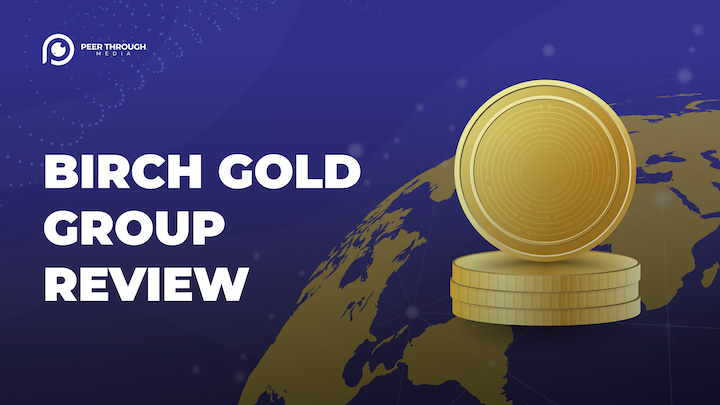 There is a gold (IRA) rush in the retirement industry with new dealers popping up every week. One gold IRA provider that has managed to stay in the market since 2003 is the Birch Gold Group. In this article, we’re going to take a look at and review the company. What is the Birch Gold… 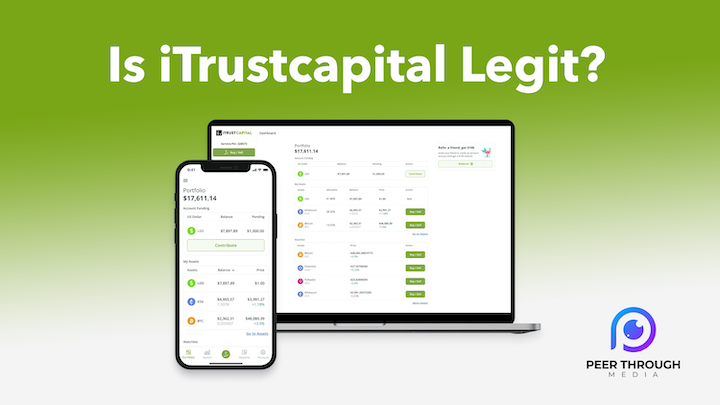 Retirement is a big deal. But the right IRA can help you ease into it effortlessly. In this iTrustCapital Review, we’ll see if a crypto IRA like iTrust is right for you. What is an IRA? When it comes to retirement accounts, the Individual Retirement Account (or IRA) stands out as the popular choice. You… 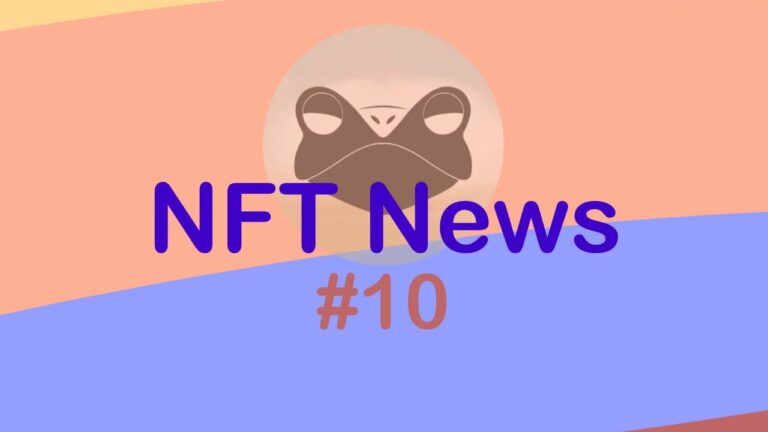 As a curious Toad, I not only had to participate and buy a million people but also fall down a never ending rabbit hole on DAO’s.